Before we get into the life story and the traveling I would like to point out – I do have an Interior Design Diploma. Now for the boring stuff…

Born in London many moons ago. A very entertaining time in my younger years living amongst the weird and the wonderful, the multicultural society, and the many friends from different nationalities. The days of knock-down ginger, roller skating, and adventure playgrounds.

Back in the day, I grew up in an old Victorian end of terrace house, siding onto a Synagogue. The days of plastered walls and ceilings, ornate fireplaces, bricks and not blocks, and sash windows. These days houses are built in nanoseconds, and the more intricate details of ceiling roses, cornice detailing, and ornate architraves and skirtings (baseboards if you are American) are lost.

My love for painting and decorating blossomed from the very first house myself and my husband, Peter, purchased, a three-bedroom terraced house in Essex, United Kingdom.  Times were difficult with 15% interest rates and not much around to buy. Basically, it was a pile of crap. No heating (one electric storage heater in the living room), draughty windows. No kitchen to speak of and no oven.

It was a step in the right direction. It took a while to tidy up, but we didn’t have the resources to make it nice that are available now. When we moved in, we had a microwave two-ring plug-in hob, and that was it. No oven. We couldn’t afford it, but they came along later.

Nights were spent watching Pete’s Bang and Olufsen TV (he had expensive taste when he was single) and we were sat on two sun loungers.

Five years later, we had redecorated most of the house I had learnt how to Artex the ceiling, wallpaper the walls with Jeff Banks designer wallpaper and moved a door, and had the wall blocked up about three times (my brother, the carpenter always said it should have been on wheels).

The next house was a newer affair, only two years old but with two kids and a third on the way we needed something more substantial. This is when the paint brushes came out.

The two eldest children had a bedroom hand-painted with Peter Pan flying through the sky, Captain Hook on a boat and glow-in-the-dark stars on the ceiling. The baby had Disney characters hand-painted around the crib and was watched over by Winnie the Pooh, Tigger, the Flintstones, Aladdin, and Bugs Life.

The marmalade orange stairway was transformed into powder blue and silver stripes, a frosted window, and new carpet. The living room was painted I think three times in three years and the dining room was the color of Baileys with dark brown stencilled borders.

A trip to Spain to my uncle’s villa changed everything. I didn’t want to leave and Pete being half Spanish agreed. Being the impulsive pair we were, we packed up and moved to Valencia – making a tidy profit on the house.

Decorating a Spanish villa is a little more tricky than a UK home. Everything is tomorrow. We had quotes from builders and turned a large terrace into a gorgeous bedroom and massive home office/games room which overlooked the gardens, countryside, and mountains. The builder even made us tomato soup one night from scraps in the fridge which we enjoyed with a glass of wine. 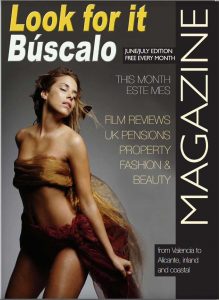 My experience of writing comes from editing Look For It Buscalo Magazine which we produced 20,000 copies of every month in the Valencia province. We then took over Think Spain Magazine and produced that – catering for the ex-pats and the Spanish.

I used to do all of the graphic design as well (I worked for a publishing company and printers in my 20s for about 10 years so I had plenty of experience).

Time moved on and after 10 years we, unfortunately, lost our house as the recession hit. We had to move into rented accommodation in the centre of town – a four-bedroom flat. It was nice but it wasn’t ours. We had to start from scratch.

Hence the move to Canada. Pete found work in his previous trade as a flat roofing consultant (we owned our own company back in London so he knew what he was doing).

I stayed behind in Spain for six months with our kids until we made the leap. It was quite a long way to go but us being the intrepid explorers were not really worried. What did we have to loose?

So here I am in Canada. The last 10 years have flown by – cold ones as well.  I get a good dose of Vitamin D from my trips to Las Vegas, freeze my backside off in the sub-zero temperatures during the winter. Yes, it is beautiful here, but oh so cold….

During my time in Canada, I managed to obtain an Interior Design Diploma and Pete has excelled in sales and is now also a whizz on SEO. 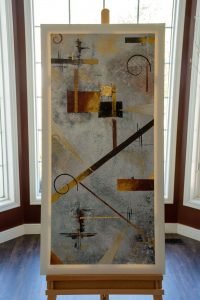 All unique hand-painted artwork, perfect for your living room, dining room or even your office

So there you have it. This is our interest and has been for many years. I love painting, decorating, and gluing things together. And if I am not on our boat, I am reading a psychological thriller or making a mess with a ton of acrylics.

Did I make mistakes with my decorating? Hell yes! If anyone tells you otherwise, don’t believe them – we all make mistakes – it is a part of learning, don’t you think?

I once painted my kids’ bedroom when we stopped at my mother-in-law’s bright yellow! Glow in the dark it compared to. God knows how they managed to sleep at night, but they could always find it.

I am a good cook – throw me some food, and I will make you something out of it – even on a two-ring hob. I am not a goddess at baking – my bread is appalling and never rises to the occasion, and everything is not unicorns and butterflies and roses around the doorway.

I make a hell of a Spanish omelet alongside Pete’s Chicken and Duck paella and won’t say no to a glass of Snoop Dog red wine – or two.

Enjoy our blog – it’s all through experience.

Stylish Interior Design offer a FREE consultation service. We will visit you and discuss your requirements – no matter how small or large your plans are. Either drop us a line or please feel free to give us a call.

Let’s Build Your Dream Home Together